Showing posts from February, 2019
Show all

Chicken and Veggie Soup with Lemon 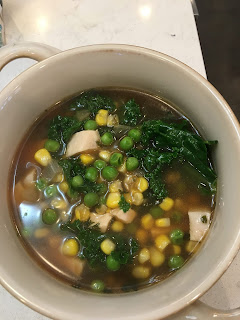 Children change everything. Winter used to mean Christmas (YAY!!!!) and Parties (YAY!!!) and fake holidays where everyone eats appetizers (Super Bowl!!! The Oscars!!!). After children, winter is that, AND a seemingly endless cycle of sick. It's better now that they are older, but still. December-March means cough, booger-nose, tummy troubles, fever, repeat. Small children tend to cough right into your mouth, without even trying! Whomp-whomp, everyone is sick.

But don't worry. I have soup. Lazy soup. Lazy soup with things you might have lurking in your fridge and pantry. Also, its very low in Smart Points, 1 point for a giant, comforting bowl.

I kinda winged this recipe. HOWEVER, the base is straight out of Americas Test Kitchen's (ATK) Family cookbook. Their recipe (for chicken pot pie p. 323) involves sautéing onions in butter then splashing in dry sherry to deglaze, and that shit is delicious. Per ATK's recommendation, you've got to use this sherry though: